I Diez, P Bonifazi, I Escudero, B Mateos, MA Munoz, S Stramaglia, and JM Cortes. The Brain Hierarchical Atlas. 22nd Annual Meeting of the Organization for Human Brain Mapping , OHBM 2016 [pdf]
Background. Most used brain atlases are purely anatomical or structural [1-4], and others are purely functional, like the well-known Brodmann atlas based on lesion studies or data-driven methods [5-6]. Although obtaining suitable brain partitions (or atlases) has been studied intensively (see [7] and references therein), to the best of our knowledge, the first brain partition that accounts for subnetworks that are relevant to both structure and function is the Brain Hierarchical Atlas (BHA), published in [8] and presented here.
Methods. This work was approved by the Ethics Committee at the Cruces University Hospital; all the methods were carried out in accordance to approved guidelines (Principal Investigator: Jesus M Cortes). A population of N=12 (6 males) healthy subjects, aged between 24 and 46 (33.5 ± 8.7), provided information consent forms before the magnetic resonance imaging session. For all the participants, we acquired for each subject both diffusion tensor imaging and resting functional magnetic resonance imaging. Our results have been fully validated with a population of N=30 subjects from the WU-Minn Human Connectome Project [9]. Large-scale brain networks were obtained after magnetic resonance imaging (MRI). Whilst the T1 was mainly used for preprocessing and coregistration, diffusion tensor imaging provided structural networks (SN) of gray- matter areas connected by white-matter tracts, and variations in the blood-oxygenation-level-dependent T2* signal provided functional networks (FN). Both FN and SN were obtained at a resolution of 2514 brain regions, making FN and SC to be represented by (2514*2514) matrices for each of the subjects. For details on how we built these networks, see [8]. Applying a standard hierarchical agglomerative clustering algorithm to FN and SN, we compared at the moduli level FN and SN by exploiting their hierarchical modular organization (figure 1). This approach provided a hierarchical tree or dendrogram in which nodes were progressively merged together into moduli following a nested hierarchy of “vicinity” (which reflects distance in the correlation for FN and distance in fiber number for SN). More specifically, we compared FN and SN by employing the template of hierarchical modular organization derived from FN to visualize SC, and vice versa. We searched for the best common partition shared by structure and function by maximizing the ‘cross- modularity’ index X [8], an index which is large for a given brain partition if the corresponding Newman’s modularities of the two matrices FN and SN are large and there is also a large within-module similarity between both divisions (i.e., a large fraction of existing intra-module links are shared by both networks). Thus, a large cross-modularity value indicates that both FN and SN are highly modular and, at the same time, the moduli are internally wired in a similar way.
Results. After maximization of the cross-modularity X, we found that the partition into 20 moduli derived from FN (as portrayed in figure 1) was optimal, although similar quality partitions can be obtained in the range of M from 10 to 30 [8]. The Brain Hierarchical Atlas (BHA), composed by these 20 moduli or ‘subnetworks’ maximizing X is illustrated in figure 1. We studied the similarity between the BHA and other existing brain partitions (figure 2): (i) The automated anatomical labeling (AAL) [2]; (ii) The resting state networks (RSNs) [5]; and (iii), The Brodmann atlas (included in the software http://www.mricro.com). By comparing with AAL, we found that different anatomical areas can be included in a single BHA subnetwork, clearly highlighting that a BHA subnetwork simultaneously can recruit distinct brain circuits. Conversely, the same area of the AAL might be included in several BHA subnetworks, highlighting the anatomical overlap of the latter. Similarly, we compared BHA with the well-studied RSNs; two of them displayed a strong overlap (>0.5) with two distinct BHA subnetworks, the “Sensory motor“ with the subnetwork 3 and the “Medial visual” with the subnetwork 4, while the other RSNs overlap with more than one BHA subnetworks. Finally, when comparing with the Brodmann atlas, we found that the Brodmann area number 18 was well-characterized by the subnetwork 4 and that the Brodmann area number 20 matched to the subnetwork 18.
Conclusions. The BHA (i) represents a distinct brain partition from those previously described in the literature; (ii) incorporate distinct both structural and functional brain regions into a single operative subnetwork/unit; and (iii) can overlap and share both anatomical and functional brain regions. In the same way as alterations in resting state networks have been reported in several brain pathologies and diseases, we expect that the use of the BHA, with simultaneous focus on structure and function, might help also in diagnosing disease.
References: 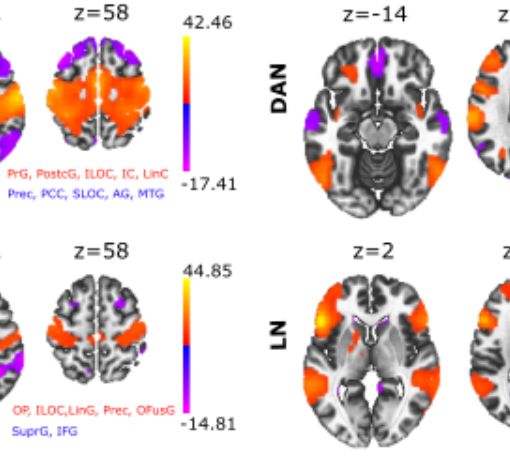